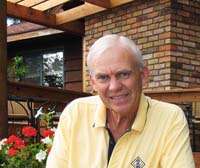 Stan Bormann, APSA, MPSA has had an interest in photography since a 9th grade photography class when he created a contact print darkroom in his mother's fruit cellar. This interest laid in the background until he acquired his first digital camera for Christmas in 2002. He has been the founding president of two photo clubs in Arizona, Grand Photos and West Valley Photo. He has also been the president of the Arizona Camera Club Council, ACCC and is now VP of the PSA Arizona Chapter. PSA positions have included Chair of the Pictorial Print Division and Conference VP. He currently has the PSA position of Director, Member Services, which resulted in him receiving the Fallon award in 2019. He is also the current chair of the Arizona Print Circuit. He has over 2,000 acceptances in international exhibitions. He has been an active digital photographer and PSA member since 2003. He is an active international traveler having visited 49 states, all Canadian provinces but one, and about 70 countries. The 7th continent was on the agenda in 2016 but the ship broke down. He has particular interest in architecture and creating conversions to monochrome and has been a speaker at the PSA conference on monochrome.
His current email address is snbormann@gmail.com