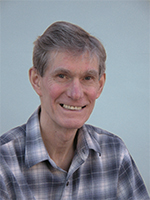 Although I started in photography as a boy in 1946, and was soon developing and printing my own films, I really did not get serious until 1989 when I joined a camera club. I then realised just how very ordinary my pictures were! I started to enter club competitions and to listen carefully to the critiques, with the result that my photography gradually improved.

In 2003 I decided to try the international exhibition scene and was pleasantly surprised to get some acceptances. This led on to joining the PSA and aiming for star recognition as well as trying to achieve FIAP acceptances. In March 2009 I was awarded the AFIAP distinction, and in September 2009 I was awarded PPSA. Also in March 2009 I was successful in achieving the ARPS distinction of the Royal Photographic Society.

I lived on the south coast of England between Portsmouth & Southampton for about 30 years, working in the aircraft industry (jet engine control systems), having previously worked in aerodynamics and then flight test in other parts of the country. Now retired, I live close to where I was born, in the north-east near Middlesbrough. The scenery here is beautiful and my wife Paula and I both enjoy getting out to take pictures. I can be reached at guy-davies at gdpix.co.uk My preference is for landscapes but I also love waterfalls and seascapes. I have tried photographing people too, but only in the environment, not in the studio.

Until early 2004 I shot slides on a Nikon F90 (N90 in US), but now use a Nikon D300 digital SLR camera. I find that changing to digital capture has released my inhibitions as I am now much more willing to try out shots as experiments, whereas with film, I was always conscious of the cost. I don't claim any greater success rate than with film, but it's much more fun!