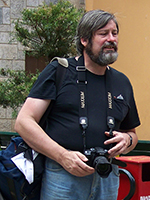 A native Argentinean, Josť came with his family to the United States in June 1990 to work for the Interamerican Development Bank. In 2000, he moved to the International Monetary Fund. Both institutions are located in Washington, D.C.

He became a more serious amateur after joining the North Bethesda Camera Club in 1995. He took also several photo courses at the Smithsonian Institution.

Through his work, Josť has traveled to many countries, and has used this opportunity to photograph cities, landscapes and people. He switched to digital in early 2007, buying a Sony Alpha 100, which allowed him to use the Minolta lenses he already had. Most of his photography is straightforward, using Photoshop to perform only minor adjustments such as levels, curves, brightness/contrast, dodging/burning and, occasionally, some cloning.